This post continues my history of WFRP1, which started here.

White Dwarf 51 (March 1984) was one of the rare issues in this period that contained a Warhammer article. It accompanied the launch of Citadel’s new C04 thief miniatures and described role-playing rules for thieves. It was titled ‘Watch Out, There’s a Thief About’ after the slogan of a British public information campaign which encouraged vigilance against crime. 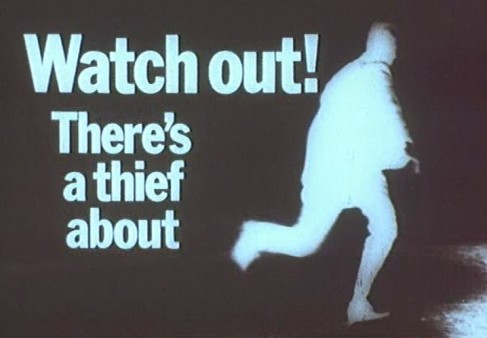 The article is attributed to “Richard Hanniwell” (sic, ie Richard Halliwell). I am tempted to take the misspelling as evidence of the disconnection between GW and Citadel at this point. It is portrayed as an extract from a longer future publication:

This article is based on rules laid out in the new edition of Warhammer Vol 3 which will soon be available from Citadel Miniatures.

The “new edition” that this quotation refers to was WFB2. It is clear, though, that at this stage the draft was quite different from the published version. Volume three of the published edition is the ‘Battle Bestiary’, which contains none of this material. By the time of publication, the decision had been taken to remove all role-playing content from WFB2 for inclusion in a separate supplement.

Volume three of WFB1, however, does contain role-playing rules. So it appears that at this point the new edition was intended to follow the structure of its predecessor and be a combined wargame and RPG. The article is, therefore, a tantalising glimpse of the early draft of WFRP1.

The rules it describes have advanced dramatically from those in WFB1 and have many similarities with the system eventually published in WFRP1. WFB1‘s character types were extremely basic. There was a choice of just two “career paths”: Fighter or Wizard. In the article, however, there is a far greater variety of character roles. There is a third career path, that of Thief. More significantly there are also several different “types” or “classes” of Thief: Anarchist, Cat Burglar, Highwayman, Lock Smith, Thief and Tomb Robber. This greatly expands on the bland archetypes of WFB1. Moreover, although they are not mentioned in the article, I presume that in the full Warhammer draft there also existed a similar array of types and classes for the Fighter and Wizard career paths.

I believe we see here the prototype of WFRP1‘s system of career classes and careers. The “career paths” of Fighter, Wizard and Thief developed into WFRP1‘s Warrior, Ranger, Rogue and Academic career classes. The “types” or “classes” became careers. In fact, all but one of the the Thief types in WD51 would survive in some form as careers in WFRP1.

Thief types in WD51 and their corresponding WFRP1 careers

The choices of Thief types may show the influence of contemporary media. The Highwayman may have been inspired by the popular Dick Turpin TV series (1979-1982). It is hard not to see in the Tomb Robber Indiana Jones in Raiders of the Lost Ark (1981). I even wonder if the Anarchist might have some connection with The Young Ones (1982-1984).

The Thief career path is open to any character with an Initiative of at least 3. This characteristic limit is consistent with WFB1‘s approach to Wizards, who had to have Intelligence of 5 or above. It is also perhaps the origin of the characteristic requirements for WFRP1‘s career classes.

In addition, there are requirements for each of the Thief types. They set further characteristic criteria that must be met, and also impose alignment restrictions. For example:

Highwayman. Requires Initiative 3+ and Cool 4+. Must be Neutral, Evil or Chaotic.

The article is, like WFB1, silent as to whether it is possible to change careers. There is no specific statement that it is permissible, and there are no equivalents of WFRP1‘s career entries or exits. On the other hand, there are no statements prohibiting changes, just requirements that must be met. It seems most likely to me that characters were expected, as in D&D, to remain in a single type, and that career changes were a later innovation. I base this only on the belief that Halliwell would have made explicit such a radical departure from the norms of contemporary RPGs. It is possible, though, that career changes were present in Warhammer from its earliest incarnation.

Unlike WFRP1, the article does not distinguish between basic and advanced careers. WFB1 had no need for such a distinction as all careers were adventuring careers, and a character’s background was handled by the “skills” system. However, WD51 introduces a new skills system, which presumably replaces that of WFB1. This may be the point at which arose WFRP1‘s confusion between careers as past occupations and careers as present ones.

The Thief classes are presented in a similar way to WFRP1. There is a short description of the class, followed by lists of characteristic increases, skills and trappings. For example:

Highwayman. … Highwaymen are notoriously flamboyant Thieves. Most originate from Bretonia [sic] or the Wasteland, two realms with lonely country roads, flash stagecoaches and a jewel-laden aristocracy.

Highwaymen are as much concerned with style as anything else. Even when working they will never be less than immaculately dressed. Their favourite garb, or ‘drag’, is a mask, a cloak, frilly shirt and, of course, an outrageous hat.

There is no explanation as to how the “attributes” work. It is possible they are benefits received on entry into the class, but that seems very generous. It seems to me more probable that attributes are earned in character advancement. If that is the case, it signals another change from WFB1. WFB1 awards characteristic advances for accumulated experience points, according to career-specific tables. The new mechanics require something different, possibly alternative experience tables which award attributes, or even a system of spending experience points, as in WFRP1.

The characteristic advances have some noteworthy features. Weaponskill increases are limited to specific weapons. Some advances are for a randomly generated value. This might mean the character can receive a multiple-point increase in one advance, or perhaps that a single-point increase can be taken mutiple times. It is not explained in the text.

The skills system is entirely new. WFB1‘s skills were broad and vaguely defined features received in character generation. WD51’s are specific features, with clear descriptions and rules for their use. They are all one-off skills, except Lock Pick, which (like the equivalent skill in WFRP1) can be taken cumulatively. The system is remarkably close to that published in WFRP1.

Skills in WD51 and their counterparts in WFRP1

The skill descriptions explain the rules for performing related actions. It does not seem to be possible to carry out these actions without the relevant skills.

The rules for performing actions are ad hoc. WFB1 did not have any system of standard tests for non-combat actions. The first Citadel Compendium did introduce some percentile tests based on 8x personal characteristic scores. However, this mechanism is not used in the Thieves article. Instead there is a hodge-podge of inconsistent rules.

Lock Pick. The player throws a d6 each time. If the score is equal to or higher than the lock’s rating then the attempt succeeds and the lock is picked.

Pick Pocket. After each attempt the games master should roll a pair of percentage dice to see if the theft has been noticed. There is a base 10% chance of this happening, modified by minus the Thief’s initiative and plus the number of pockets ‘dipped’.

Dodge Traps. The player must roll less than his initiative level on a d6.

The process by which PCs acquire skills is presumably the same as the process for advancing characteristics, since both are listed as “attributes”. Unlike WFRP1, most skills are randomly generated.

There is no explanation of the role of trappings. I presume that, as in WFRP1, they are either received automatically on initial generation or purchased on subsequent entry to a career (if applicable).

Some of the trappings are worthy of comment. The Tomb Robber’s magic sword demonstrates that Warhammer was not yet a gritty, low-magic setting. The bombs and pistols are the first appearance of gunpowder weapons in Warhammer. The Highwayman’s “outrageous hats” come from the same humorous streak as WFRP1‘s small but vicious dogs. The idea of highwaymen as fashionistas perhaps owes something to the Adam and the Ants song ‘Stand and Deliver’ (1981). 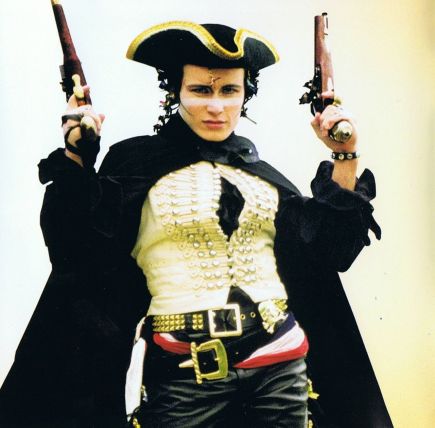 There are other quirks. The Anarchist class incorporates special provisions awarding experience points for killing establishment figures. The alignment system differs from WFB1. WFB1 uses the alignments Good, Evil, Neutral, Avarice and Hunger. The article instead uses Lawful, Chaotic, Good, Evil and Neutral alignments, in line with WFB2 and WFRP1.

Overall, the Thieves article is an odd piece. It is barely usable with the published WFB1 rules. However, it provides an illuminating window into the development of the game that became WFRP1, and we see the birth of probably WFRP‘s most distinctive and innovative mechanic: its careers system.

This is the last post in this section of ‘The WFRP Story’. The next section starts here.

Title art by Walter Velez. Used without permission. No challenge intended to the rights holders.

This site uses Akismet to reduce spam. Learn how your comment data is processed.